How to win more at work and in life?

Our job as business consultant is to help individuals and leaders to recognise what is success and making it happen frequently for themselves and their team members.

Find out how to do that, using the Small Steps To Big Changes approach.

1. Look out for times when you were successful.

In my workshop with clients, one of the key areas that I ask them to look into is the time when they did something really well and were proud of it.

A five-star hotel that I recently worked with, had a discussion about how to run successful promotions in their restaurant.

They mentioned that in a single year, they ran many promotions but not all of them were successful and well-run.

The first thing I zoomed into, was to ask them when was a time they ran such a successful promotion and what they did well in it?

All of them were able to mention the name of a specific promotion that was a huge success immediately and unanimously.

They described how they came out with the entire promotion and had three months to brief all service staff and conduct the relevant training. In addition there was a tremendous amount of coordination between the marketing to Food & Beverage outlets and other staff as well. They involved the other heads and team leaders into discussions.

The result was a well-run promotion.

When they started to describe the things that were done, it helped them to realise that there are many clues which we can glean from simply learning about what created success, rather than constantly talk about failures.

There were times where we have done things well but we didn’t systemise it. This may show up at the times when someone new leads the project and didn’t do things in the same way to replicate more success.

Back to the example of the promotion above. They realised that if they could put the exact process into writing on how they ran a successful promotion, they could effectively repeat this again and again.

My rationale is that if you had a checklist for housekeeping so that they could clean each room with consistency, why can’t we create a checklist for running promotions so that we could deliver the next one with precision and flawless execution?

In another case, just think about the french fries in MacDonalds. They are famous because they are consistent with the way they produce the fries: the exact temperature to use when frying them, the duration, and what to do when you pull the fries out of the boiler. It is so procedural that even students could execute it flawlessly.

Systemising is important if you want to reproduce good results consistently. Do note that you should only systemise the process when you have optimised the process. 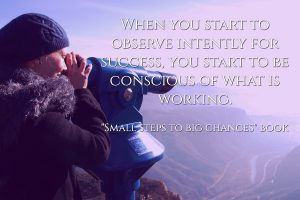 3. Keep doing what is already working

I know that this sounds obvious, but it isn’t. Sometimes we change processes simply because we felt that it was time to change.

When we change things that are already successful, we run the risk of turning something successful into making it entirely opposite.

Back to the story of this five-star hotel. In one of their most popular restaurants, they have a few dishes that are really good. One of them was the chicken rice.

However, they have a mandate to change the menu every quarter. This is to keep to menu ‘fresh’ and ‘updated’. The chef has tremendous pressure to constantly come up with new creative dishes every quarter.

This created a big problem from a branding standpoint. They had good dishes but the problem was that it was not available on the menu all year round. When people returned to the restaurant to order chicken rice, they were disappointed that it was taken off the menu.

This created a lack of ‘signature dishes’ that made the customers return and thus reduced additional revenue.

Therefore they decided that for items that were really successful, they will be kept on the menu all the time. Those that were not so popular could be rotated every quarter.

Instead of constantly doing new things, they are now very aware of keeping what works and do more of it.

Similarly, there are ways that you do things which will work very well. Focus on what creates success and do more of it.

For example, if you want to be more productive at work, I would like you to think of a time when you were extremely productive. What happened? How did you do things differently? Next, how can you systemise the way you work? Create habits, checklist or SOPs around the way you work based on what makes you successful?

﻿Kenneth Kwan is an Author, Leadership and Motivational Speaker, who has spoken to over tens of thousands in 18 countries on developing a success-oriented mindset and what is required to lead sustainable change. He has helped Multi-National Companies (MNCs) and Government Organisations shift employee mindsets to help them create proactive and high-performance cultures. He specialises in moving people from being problem-focused to...

Four reasons why reflection is important to be successful

What business are companies like GRAB and GOJEK in?

How to win more at work and in life? | Asia Professional Speakers Singapore